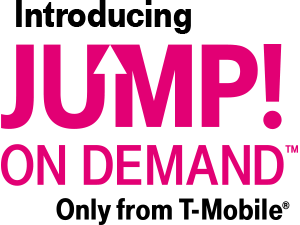 T-Mobile created a new wireless plan called T-Mobile JUMP!  to address the needs of customers who want to upgrade to the latest and greatest Smartphone when a new device is available or when you are tired of your current phone. This was later renamed to JUMP! On Demand in June 2015.

Normal Smartphone plans in America require shoppers to commit to a 2 year contract. People cannot change phones during this time unless they want to pay an expensive early termination fee (ETF), for cancelling their contract. With this new program, you can upgrade as many as 3 times a year, more often than AT&T Wireless or Verizon Wireless. As you read our T-Mobile JUMP! On Demand review, you will see how much it costs and whether it is worth signing up for.

$0 at signing + $X/mo. for 18-months on approved credit. If you cancel wireless service, remaining payments become due & you must return working device.

In a separate blog post, we analyze AT&T Next Plan and Verizon Edge Plan, which are similar to T-Mobile JUMP!, but significantly different.

T-Mobile changes its plans from time to time, so we will reexamine them when necessary. Additional short term promotions may popup. They have already adjusted this plan to make it more attractive. They dropped the 6 month requirement before you can upgrade.

Upgrading early with a 2 year Contract

With a traditional 2 year Smartphone contract, a user wanting to upgrade to a new handset would have to pay the following:

This is a steep price, hence the JUMP! Plan was born.

One of the most popular no contract Android Unlocked smartphones. How to Buy an Unlocked Smartphone

Consider purchasing an unlocked cell phone like the Blu Life One 4G if you are on AT&T or T-Mobile and want a new Smartphone without a contract. Unlocked Smartphones allow you to subscribe to low cost carriers mentioned below and function internationally, so you can use the same phone abroad.

Choosing the right plan for you is time consuming and can also be a hassle. We've done the research and you may save over $1,000 each year! Be sure to check out our no-contract Smartphone plan article: How to Find the Best No Contract Smartphone Plans where we compare all of the major network carriers. Check out our How to Buy an Unlocked Smartphones article to learn what it means to have an "Unlocked" Smartphone.

The cellular industry is built around yearly releases of major products. Samsung and Apple introduce new flagship devices every year. Each year, customers have to make a decision whether they want to break their contract to upgrade to the newest Smartphone.

The JUMP! plan allows users to upgrade as often as they would like (up to 3 times a year) without incurring penalties. There is always a catch, so we will examine the plan in detail. Most articles have labeled the JUMP! Plan as expensive and a way for T-Mobile to generate more revenue. Our analysis will give you hard numbers on the exact costs.

Here are the main features of this T-Mobile Smartphone Plan:

How to Start a JUMP! Plan

Here is how you begin a new JUMP! Plan on T-Mobile:

Customers pay the normal monthly installment payment, which is the cost of the smartphone divided into 24 monthly payments. Typically $679.99 / 24 =  $28.33 a month.

We will list out the charges due when you setup a JUMP! Plan for two of the most popular Smartphones on the T-Mobile network.

iPhone 6 16GB or Galaxy S6 32GB with JUMP! On Demand Plan. This allows us to upgrade after one year.

Amount due at sale:

Sales tax on full value of phone $57 in our area.

Amount paid after one year:

You can get a new Smartphone at anytime

No Surprise – this is $240 More than normal 2 year plan! You're basically paying how much the handset is worth in extra JUMP! fees.

Costs When Upgrading After 1 year

Lets pretend that we started our plan with an iPhone 6 or Samsung Galaxy S6, kept it for a year, then upgraded to the iPhone 6S or Galaxy S7. Here are the costs involved:

We upgrade to a new Smartphone after one year. Trade in the existing Smartphone. Remaining payments $27/month x 12 = $324. T-Mobile will pay 50%, meaning that you will pay $162 at time of upgrade.

$469 premium using JUMP! on demand over a standard 2 year contract - but we upgraded to a new phone. You did not get to keep the iPhone 6 or Galaxy S6 though.

Caveat – you do not own the phone, and had to trade in the first phone after the first year.

Anytime you want, you are ready to get another phone!

When is the T-Mobile JUMP! On Demand Plan worthwhile?

There are specific situations where the JUMP! Plan is worth considering. One of these situations might depend on your timing on fulfilling the contract.

The AT&T Next Plan can be cheaper and has situations where it is more cost effective.

If you wish to use your Smartphone Internationally or with a different wireless carrier's SIM card, you need to unlock your phone. T-Mobile does allow you to unlock Smartphones with SIM slot right away by calling customer service. Here are the requirements:

AT&T Wirelesswaits until you fulfill your contract. This is much better for international travelers.

T-Mobile JUMP! On Demand Plan adds more ways for Smartphone owners to upgrade to the latest technology without waiting 2 years for their contract to be fulfilled. If you are a frequent upgrader, you should do the math and consider this plan.

Do you have a different opinion or a suggestion? Please leave a comment below.